You are here: Home / Interviews / A Real Life Experience About Asian Work Ethics 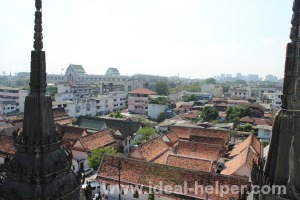 Asian work ethics is part-13 of the second interview from Stefan from Germany, who lives the Four Hour Work Week lifestyle in Thailand.

I would like to give you a real life example about Asian work ethics because I live in Asia.

I would love that. Go ahead.

This is from my perspective and maybe from yours too, this is completely and utterly insane behavior. We started here with a cleaning lady, okay?

We moved in and our landlord knows someone and he sent these people to us and they cleaned here. And we told those people, we need every week – Sunday at this time. Every week.

Just every week. No questions. You come every week. Knock on the door. Come in. Clean everything, just everything. Dirty? Clean it and you get paid for that. Very good. Very good. This is the job. You know what happened?

We have now a new cleaning lady and last week, she seemed very good because she understood that she has to come every week and she has no questions just clean everything.

Last week, she didn’t come and we were already looking at each other thinking “Oh, this is again the old Asian thing.” We contacted her and it turned out she was here.

But she knocked on the door and nobody opened which is crazy because we told her that we are always here and we already had missed her almost because she knocks very soft and it could be the tree outside. You don’t know when…

Oh my God, I can not understand what happened.

You know, I mean, we are there. She can knock as long as she wants to just get our attention. Or just open the door because the door was open. Because we are here at home, we don’t close the door.

We don’t lock it. We don’t need it. So she could just come in. Instead, she decided to knock like silently as she does and then nobody is opening and then leave.

But the funny thing is when she was knocking on the door, I was inside and I wasn’t sleeping or anything. I just didn’t hear her.

Okay. So this was different between their levels of politeness. I mean, she did knock as you’ve said so she did her job but knocked very quietly because that’s her nature. She didn’t want to wake you.

Then you would have to adapt and say, “If you knock, you can enter. Then just open the door and look into and see if we’re there.” Something like that.

Yeah. We told her now but…

That is you can be rude, you can be whatever as long as the job is done, whatever I don’t care.

I think that is more important for Westerners. Am I right?

If we want to say something global like that, I might agree. But don’t you see that it might be important for people from other countries that politeness is like the most important thing in the whole world?

I can see that but I don’t agree.

That’s okay. But you have to agree that there are differences in the world and you cannot expect people in Asia to behave like people in Germany.

If you live there, you cannot expect people to live like. Then you would have stayed in Germany, if wanted German behavior.

I have asked my virtual assistant to comment on your experience as he is also from Asia, and here is what he wrote:

In my opinion, Stefan’s cleaning lady is totally lying (with due respect) that she came and knocked the door, but nobody opened the door.

I think it’s a lame excuse, actually she didn’t come at all and when Stefan asked her why she wouldn’t come, she pleaded this lame story.

It’s just like that someone bunked from college and the teacher asked ‘where you were last day’ and he replied that I wanted to come but I missed out my bus, therefore I couldn’t come.

Although I live in Asia, but this is not something new for me, even I face this problem very often.

But I could assume, at least, if I state my wishes. For example, you come every week, you do this whatever happens. I mean, that they fulfill my wishes.

Okay. But that’s the universal thing that I would expect from every human being. If I express my wishes, I want them fulfilled whatever is necessary for that.

Are you a King Stefan 🙂 That sounds very one sided – “I expect every human on the Earth to respect my wish and to fulfill my wishes.”

Yes. If I have a job, a task, that is to be fulfilled. That is the job of the employee is to fulfill the task. I put the task very high.

Yeah. But I think here this is a communication thing, you have to adapt to the situations as they are. When in Rome, do it like the Romans. If you are in Asia and people behave like that then you have to adapt.

Else, you will not get your job done. You will stay unhappy and there’s nothing you can do about it. So either you buckle up on the debt or you don’t get the job done. Your choice!